As everyone knows Whistler is the meca of mountainbiking and it kind of is...  Its got sick DH and trail riding but I must say Queenstown kicks its ass when it comes to jumps: gorge, mini dream and dream are definitely one of a kind.  So i must admit I was expecting abit more in that department but that's fine because the DH is so much fun!  There's every kind you could ask for, fast, slow, tech, you name it, and then there's Crab Apple Hits!  Its a sick five pack of jumps that are rather large, getting into the late 30s (feet) at a guess.  Might manage to get some photos on that at a later date.


Its crankworks at the moment and to start it off Chromag and Reece Wallace combined together to host the Family gathering which was a lax as jump jam at the river jumps.  There were some shredders there along with the odd pro, defiantly a great jam with a sweet vibe.  Also the longest train I've ever seen (or been in), I went through it three times and it ended the way I thought it might, by a crash, but luckily the person was fine. 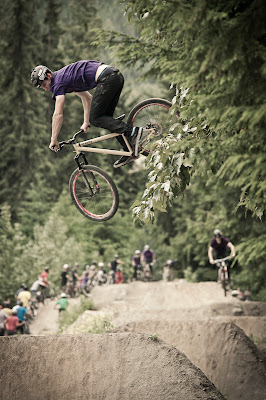 Next stop for me is Crankworks Colorado! Stoked, Dan Brown and crew are giving me a ride there, 20 hours driving or so from what I hear!
Posted by Conor Macfarlane at 9:36 PM