Crankworks Colorado was such an awesome experience for me, it started by road tripping down from Whistler with a awesome crew of people which kept it interesting.  We stopped in salt lake for a day to ride the local parks with Cody Gessel which was sweet but it was stupid hot!  We ended up getting to Winter Park on Tuesday night, after about 30ish hours driving all up) and went and checked out the course Wednesday morning  then hit up practice to try sort it out.  Kyle Ebbet and crew did a sweet job with the course, the idea of small to big was a really cool in my opinion with the bigger jumps getting up to 35ft.  We practiced and hot-tubbed  Wednesday and Thursday then Friday we hit up quails, I had a run sorted out so I hit that up and ended up qualifying in 17th I think which to be honest I was disappointed with but at least I got into the finals so can’t complain with that.
Saturday I was the first person up practicing because I had afew ideas to help me better my score.  I got most things I wanted to in practice so I was stoked with that.  I was a lot more nervous for my first run here compared to Claymore but I managed to stick it and flipped the 35footer which was playing on my mind so it was good to get that out of the way, I also managed to 3 the drop which was really long and only 4 other people (I think) managed to 3 it so I was super stoked on that.  Because I had a good first run I decided to throw a 360 that I had been trying in practice which had smashed me once, popped my tyre once and ridden out once but with no speed, it was the long and low transfer which the biggest trick on so far was a barspin or tuck no –hander.  I nailed my run up top and sent the 3 and managed to land it but didn’t have much speed so pedalled my ass off and hucked the last jump and just cleared it but didn’t manage to trick it so I was bumbed on that as I was going to throw my biggest trick but ohwell I came out unhurt so I can’t complain and I got a lot of credit for the 3 so I was happy with that.  I ended up placing 15th which I’m pretty bumbed about because I know I could have done better but I'm stoked to come away from the event not even feeling banged up.
Overall it was an awesome experience and I’ve learned so much!   I didn’t know what I wanted to do next year because of studying but after this comp I’m super keen to get back over here and hit up the American comps again just to hang out with the crew and have fun so hopefully it will work out.  This was the last comp for me over here due to Goat Style getting cancelled so just lots of DH and freeride for me and hopefully a big roady with some of the crew from this event. 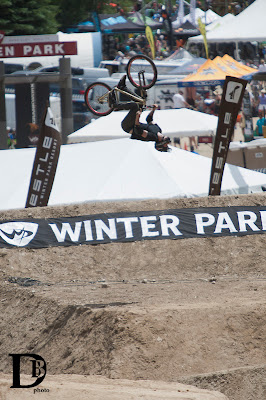 Posted by Conor Macfarlane at 9:50 PM