On Wednesday the secondary school teachers decided to strike, why couldn't they do that when I was at school..  anyways this gave a few of my riding mates from down home the chance to come up and hangout for the day.


We went to all the parks around dunners, most of which I have never been to as they are to far for me to be bothered biking to them.


The Fairfield ramps are a sweet setup but the copings stick out a mile which makes it abit harder to ride. 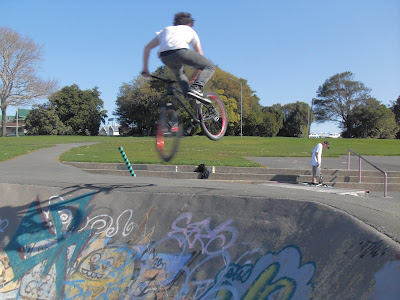 At mornington I stole chazes BMX to try t-whips so he jumped on my bike and t-whiped and barred second try on each, jealous.  I've been told so many times that once you get to a certain stage with tailwhips its all in your head so maby one day I can get my head around it...

Was supposed to be doing a 6 hour team XC race this arvo but the weather decided it had to  crap itself, been so long since I've dun a XC race so was really looking forward to it and was even going to get a sweet XC machine from Bike Otago (who aren't here to fk spiders apparently).  But before the weather crapped itself I managed to get my first ride of the season in on the trail me cam and afew others have been working on over winter. 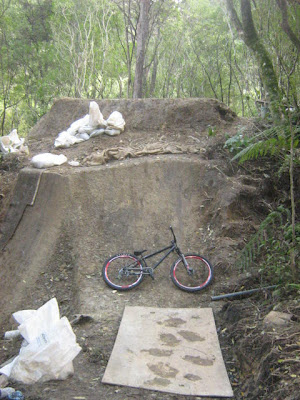 I'll get some photos of it at a later date but heres one of the stepup before I rode it today.  Before the ride today I had dun a ratio of approx 1:300 hours riding to digging and after I had dun a ratio of about 1:70. Rode for 2 hours today so you might be able to work out how many hours digging I've put in.  I've been wondering lately how much better my grades at uni might be if I didn't dig so much.
When I came to dunners most people I talked to said how there was nowhere to DJ around the area, simple, if you go dig you'll reap the rewards.

Get busy
Posted by Conor Macfarlane at 1:13 AM