Uni holidays for me at the moment, stoked!  On Saturday I met up with the local crew of Adam, Pete, Ricky, Sam and Tibby and we had a jump in my back yard before meeting up with Brett Frew who had come in from the farm for the day.  We had a bit of a street ride then went out to a secret jump (well not as secret as it used to be before someone we thought we could trust told everyone) and had a bit of a session.  Towards the end of the session everyone went nuts, Pete started landing his 3s and Ricky decided it was time to step up and try some flips.  After one 'scary to watch' attempt he managed to get it round only to 50/50 the landing which ended up being the story of the day for him.  This got Adam and Brett pumped to join in as well.  Brett landed afew flips without to much trouble after a crash or two and Adam landed his first clean flip!  Saturday ended well with a bit of a barby at Petes (cheers greg for the feed) with a bit of a discussion of what we would do on Sunday.

We decided if the weather was good we would go out to the Frew Farm and have a dig/ride.  We woke up to rain which was a disappointment so decided we'd go to some old quarry's which were in the direction of the farm incase we got the text.

We got to the quarry and decided we'd build a small hip, after 10 min work we had fashioned a hip out of the dirt/pebbles and as soon as we started riding the rain stopped, perfect.  I decided to take my Killswitch out for the day as would suit the dj's at the frews well and was perfect for the kind of riding the quarry's gave us. 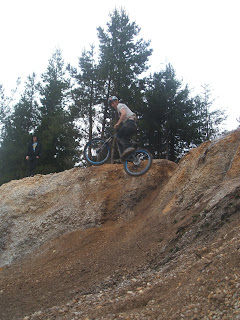 I had never 360d my killswitch off a drop before and saw a place a hipped drop could easily be made. 5min on the spade and had a drop i could 270.  Turns out its hard to underspin a drop, spun about 360 both times I tried but rode away clean 2nd go so just need to find a drop that I dont have to underspin. 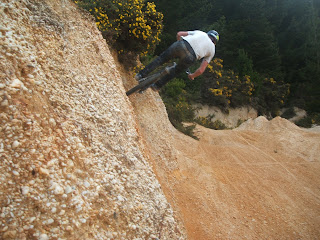 We moved on to the second quarry, there were plenty of wallrides on offer, some huge ones that would require a tow-in...one day maby.

We didnt end up going to the farm because spent so much time in the quarries but all in all was a sweet w.e back home.  Cheers to all the guys and Tibby for being a photog for the day.

Posted by Conor Macfarlane at 5:55 PM