So, Farm Jam 2013, awesome!  This year’s jam was far by my favourite, the weather played ball, the jumps were the best they’ve ever been and the company was as good as it could get; all a recipe for a good time!  I knocked off work at 5 on Thursday and picked up Nick Dethridge, Chris Beverland and Justin Roy and headed down to the farm for a chilly night in the tents.  I woke up to my first frost for the season and the sound of cows... 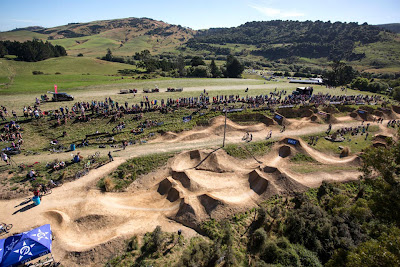 After a morning of digging and putting up signage the jumps were opened; session on.  I must admit, I rode the worst I have ever ridden at the farm and had a bunch of silly crashes doing tricks which I had done many times before on the same jumps.  I decided to call it quits early and go home to Invers for a good shower, feed and sleep. 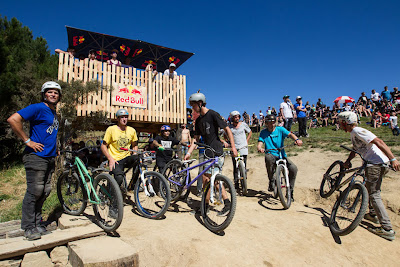 Saturday morning at the farm was a chilled out affair with a bit of practice, some digging and some relaxing; just the way the farm is supposed to be.  Once the motos started firing we headed over to watch them, highlight for me was seeing Callum Shaw, a guy I went to school with and used to live down the road from me, flipping dirt to dirt hits and throwing supermen and Indians whilst upside down, don’t even think he could flip this time last year, progression!  As 3pm got closer the mountain bikers started warming up then it was straight into the 45 min jam.  Although I had been riding terrible on the Friday I felt not too bad, I tried to ride all the lines during the jam for a bit of variety along with some tricks.  For me I was most stoked on the transfer jump into the big line from the hips line.  When we were building it I knew it was going to be an awesome feeling jump and I wasn’t disappointed!  The saying ‘time flies when you’re having fun’ definitely applied to the jam as within no time (35 min to be precise) we got the 10 min to go call, where had all the time gone...  After the jam was done we watched the BMXers KILL IT.  So many tricks, some I had never even seen before, and not to mention a few of the most steezy riders I have ever seen ride.

I didn’t have a clue where I would end up and was surprised and stoked to be called up in second place and first equal in best trick somehow.  It was sweet being on the podium again and still being the tallest thanks to a small Spanish man beside me. 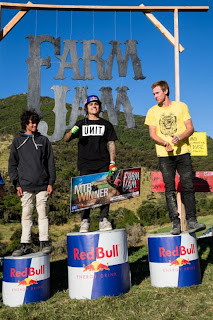 This is my favorite web clip to come out of the farm yet, no point putting up the 'official MTB highlights' as it contains hardly any highlights so heres Red Bulls Farm Jam - The action.

All in all it was an awesome weekend and is a pity that it is over for another year, bring on Farm Jam 2014!

Aaaand, Tim Pierce and I are currently doing some filming... Here is a photo to wet your appetite, its going to be a bangers clip!

Posted by Conor Macfarlane at 11:20 AM