You'll probably know that claymore didn't go well for me, my dodgy shoulder played up again and decided to pop out.  Basically I did everything that i was comfortable with in my first run but with a fronty at the end of it because we had been told that we might end up only getting one run due to the forcasted rain. 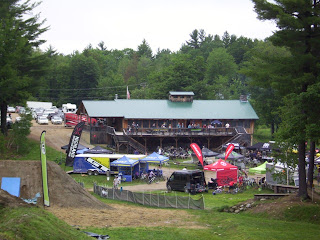 I had watched  Cam McCaul and Dustin Guilding frontie the freebird jump (the redbull wooden kicker) and over-rotate and both did their collarbones I think (but could be wrong) so i really didn't want to over-rotate so pulled forward ever so slightly but not enough.  I'm ripped about crashing because feel like I coulda done well but never know with judges I mighta only jumped afew places.


So my first proper comp was a fail but afew good things did come out of it, i got to see what level the top riders ride at and also learnt a bunch of new tricks which was cool.
Posted by Conor Macfarlane at 2:31 PM