I cant say enough about Teva, they put on the best event I've ever been to!  They made a sick course (cheers Kelly and Tom), looked after the athletes and kept the crowd pumping.  I left Dunners on Tuesday evening with Elmo and went and checked out the course the next morning, I was pretty excited to say the least but we had to wait until 12 before we could practice.


I got most of what I wanted to do sorted on Wednesday including t-wiping the first stepdown which was the scariest thing I have done in a long time!

Thursday practice started at 12 again and I was feeling good until I had a silly crash 360ing off the whale-tail which I had done plenty of times then another crash t-wiping the start stepdown which really knocked my confidence.  I smashed my ankle when I crashed on the start stepdown so I decided against t-wiping it in my run and went for a safer (and a whole lot less scary!) option.

It came time for the comp and we watched the amateurs throw down which was sweet to see.  I was last on the start list so watched everyone else do their runs then dropped in and missed afew tricks, no biggy though as I knew we had 2 more runs.  Second run I watched Benny double flip and had to drop in after that!  My run went as planned and I ended up in second place for the finals.  I was still to nervous to t-wip the stepdown again so decided to try a flair/hip-flip instead... It didn't work out as I had planned but apparently I got close.  That was my night over with a sore thumb so I just sat down and watched the boys kill it in best trick. 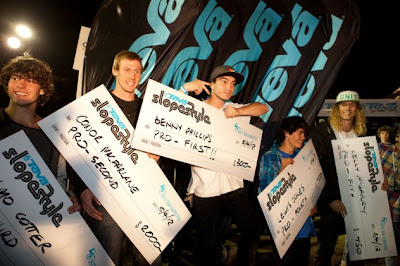 I'm stoked to walk away with 2nd place and to be part of a successful competition which will only grow and get bigger and bigger in years to come.  Thanks Teva!!!
Posted by Conor Macfarlane at 5:46 PM